Archive for the category “Amin David” 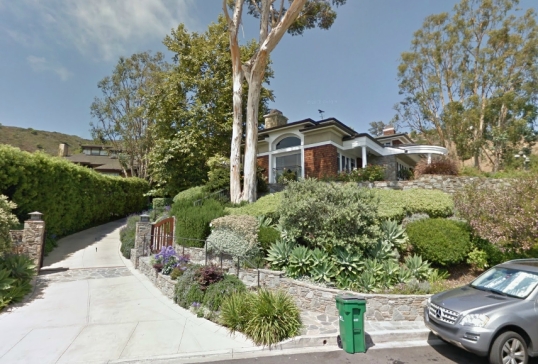 In an eye-opening email the Anaheim Investigator has obtained from the City of Anaheim through a recent California Public Records Act request, Rusty Kennedy, Executive Director of OC Human Relations, had Anaheim Police Chief John Welter attend a “special reception” in Laguna Beach last November to talk about their “partnership” in pacifying angry Anna Drive and Ponderosa Park residents in the aftermath of several fatal officer-involved shootings.

Although it is not unusual for Chief Welter to be invited to speak at different events outside of the city, further research has revealed this “special reception,” organized under the auspices of OC Human Relations Community Partners, an elite group of donors who contribute $1,000 or more each year to OC Human Relations, was held at the residence of a multi-millionaire who funnels tens of thousands of dollars each year into Kennedy’s non-profit.

The email in question, entitled “Chief’s Schedule Today” and dated Thursday, November 15, 2012, was sent by Kennedy to Cindy Hernandez, an Executive Secretary who works out of the Office of the Police Chief. Marked “high” priority, he requested she “re-confirm that John could get to this event in Laguna Beach at 5:30 p.m.,” emphasizing “its a very important event.” For clarification, he re-posted text from an email sent to Welter earlier in the day.

Just a quick note to remind you that you are speaking at a special reception for OC Human Relations Community Partners today at 5:30pm in Laguna Beach.

What we were hoping you would do is speak for about 5 to 10 minutes about our partnership, with a focus on the Ponderosa Park Forum, Civil Unrest Support, as well as the importance of the work we have done together to build trust through the years, that made you feel comfortable calling on us, and helped us know how to apply our expertise in a collaborative way.

In closing, Kennedy included his cellphone number and that of Alison Edwards, Deputy Director for OC Human Relations. He mentioned “Keith’s house” in Laguna Beach as being the location where the “special reception” would be held, giving its address. The City of Anaheim, however, redacted both numbers and the address of “Keith’s house,” citing provisions in the California Public Records Act which exempt the disclosure of confidential personal information.

Last week, the Anaheim Investigator attempted to contact Robert Dunn, Public Information Officer for the Anaheim Police Department, via email and telephone to inquire about the location of “Keith’s house” and seek additional comment on the Nov. 15th email. But as of publication date, he has yet to respond. Calls made to the Office of the Police Chief were met with a response of “I can’t comment on this” and were referred to the City Clerk, who had no knowledge of the matter.

Nevertheless, the Anaheim Investigator has confirmed that “Keith’s house” was the residence of Keith Swayne, the retired CEO of Case Swayne Co., a major developer and processor of specialty sauces and seasonings that was sold to Best Foods/Unilever for $185 million in 1999. Property tax records available from the Orange County Treasurer/Tax Collector show his swanky Laguna Beach home, built in 1916, currently has an assessed value of $2,626,382.

According to a person who attended the Nov. 15th event,  Swayne brought together well-heeled friends interested in learning more about OC Human Relations and how they can support its work. Speakers not only included Kennedy and Welter, but Dr. Jerome Hunter, the former Chancellor of the North Orange County Community College District, and Dr. Gurpreet Singh Ahuja, a Pediatric Surgeon at the Children’s Hospital of Orange County.

Swayne is a longtime member of the OC Human Relations Community Partners Board. Both he and his wife Judith have been major donors to OC Human Relations, contributing at least $130,000 to that non-profit since 2004. In their 2011-2012 annual report, the Swayne’s are recognized as “Platinum Donors” who gave between $10,000 and $24,999 that year. Several earlier annual reports state they have given larger amounts in the past.

The Swayne’s are also founders of The Keith and Judy Swayne Foundation (aka, Swayne Family Foundation), which has given thousands of dollars to OC Human Relations and other non-profits in California and Hawaii since its inception. The latest publicly available Form 990-PF the foundation filed with the Internal Revenue Service states it has $3,792,747 in assets, mostly consisting of blue chip stocks donated by the Swayne family.

The website for the Swayne Family Foundation reports Kennedy was appointed to its advisory board in 2011. Additionally, the foundation has disbursed funds to local non-profit organizations here in Orange County that have close links to him. For example, Kennedy serves on the board of the Orange County Congregation Community Organization, a non-profit that has received thousands of dollars from that foundation over the past couple of years.

Kennedy is also tied, albeit indirectly, to Orange County Communities Organized for Responsible Development through board member Amin David, founder of Los Amigos of Orange County and a former Chair of OC Human Relations. David has been a close friend of “Rusty” since the early 1980s. Several 990-PF forms from the Swayne Family Foundation available online show OCCORD received $10,000 from them in 2009 and $15,000 in 2011.

The Anaheim Investigator has also learned Kennedy is one of the highest paid Executive Directors of any non-profit organization based in Orange County. The latest Form 990 filed by OC Human Relations reports he earns $97,120 a year for only 20 hours a week of work. In comparison, Deborah Phares of OCCCO works 50 hours a week and is paid $65,834 per year (according to a 2010 filing), whereas Eric Altman of OCCORD, who puts in the same amount of time, makes $71,058.

The Nov. 15th email uncovered by the Anaheim Investigator obliterates any pretense OC Human Relations is a “neutral third party” that can be trusted to be fair and impartial in matters pertaining to law enforcement. That Kennedy trotted out Welter to speak at the home of multi-millionaire who funnels thousands of dollars into his non-profit–thus lining his own pockets in the process–is compelling evidence he has a financial stake in aligning himself with the interests of the powerful.

As mentioned last month, all of the emails and documents being reviewed at the time suggested Kennedy was wholly obsessed in demonstrating to Welter how useful OC Human Relations was in pacifying Anna Drive residents who were angry–angry at being shot and abused by the cops. Back then it was perceived Kennedy was merely being a lapdog for law enforcement. But now, with the Nov. 15th email in our possession, its clear both men are equals; they are partners in power.

Under Kennedy’s tutelage, OC Human Relations has been transformed from an organization which in the past offered some kind of recourse to the oppressed, to one that now aides and abets the oppressor–and is rewarded handsomely in return. And it’s not just a proxy for the Anaheim Police Department. It’s an apparatus funded by white political and business elites countywide who expect it to help keep Orange County’s darker-skinned rabble in their place during a crisis.

The Nov. 15th email offers compelling proof of this. After all, it details a real-life scenario where the white Executive Director of OC Human Relations and a white Anaheim Police Chief traveled to the home of a white Laguna Beach multi-millionaire who invited his white friends over and had them listen to these men pat one another on the back about “partnering” to pacify brown people in Anaheim angered at being mistreated by the police. It can’t get any clearer than that now, can it?

[Below are electronic reproductions of documents referred to in this article.] 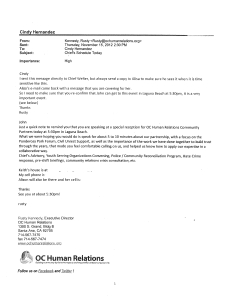 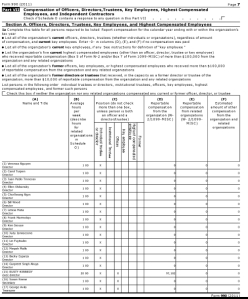